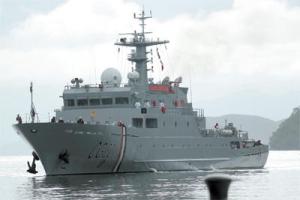 The Chinese made naval vessel that was a state secret under the former government arrived in T&T this week with questions still unanswered on this vessel. During her state visit to China the former PM told us that a ship presently being built for China in China is the ship she chose to lobby Xi Jin Ping for it to be supposedly sold to T&T. From the picture of the vessel published locally this week the following questions arise: is the vessel T&T acquired from China in 2015 the same as those built in 2014 for the Chinese Coast Guard utilising the hull of the Type 056 Chinese corvette and a new superstructure design? If yes why did China make available a vessel shrouded in secrecy to T&T in 2015, a vessel that China does not offer for commercial sale on the arms market of the world? What did the ex PM offer Xi Jin Ping that merited this embrace, was it to be China’s proxy in CARICOM?? How much did the taxpayers pay for this vessel? What is the design purpose of this vessel and can it deal with the sailing conditions and the threat horizon in the EEZ? The hull of the Type 056 corvette is suited for coastal patrols what then happens to deep water of the Atlantic? Was the vessel handed over to us with naval electronics and communication systems made in China? If yes did we ferret out the trap-doors in the systems that allow intrusion by the hackers of the PLA? The new superstructural design fitted on the hull of the Type 056 clearly points to a vessel charged with command and control and surveillance including electronic is the T&T vessel so outfitted? T&T now has on its hand a cat in bag vessel and a geopolitical red flag to deal with. One expects that the alarm bells in the military structure of the US have gone off as in the Caribbean you have a vessel handed over to the only state in the world outside of China. That is being special. And at the same time a company blocked from working on the digital backbone of the US is lovingly embraced in T&T. Coincidence or agenda?

The US response to the present assault by the Mexican traffickers of the Caribbean Basin on the US territories of the Caribbean is a lesson for us as we all face the  common threat. The US has placed in Puerto Rico it’s first brand new Sentinel class Fast Response Cutter (FRC). The US decided to use the drawings from the Damen Group for the Stan 4708 Patrol Vessel as the basis for its Sentinel class of cutters but in keeping with US policy they build their military class vessels in their own shipyards and outfit them to their specifications to deal with the threat. The weapon system and the electronic/communication system placed in these vessels is then instructive for T&T as we bought patrol vessels from Damen that arrived naked. More importantly the US has determined that FRCs are simply inadequate to handle the threat posed to their territories and mainland USA. The FRCs placed in Puerto Rico and USVI will be bolstered by OPVs as the FRCs are by themselves unable to handle the threat posed. The threat posed by the Mexican traffickers has resulted in an entirely new US Coast Guard strategic response and a new order of battle with brand new ships of the line as the National Security cutter, the OPV and the FRC. In T&T and the rest of the Eastern Caribbean we remain trapped in a time warp fed by denial and complicity.

The present government of T&T has placed in the public domain the nature of the gas supply crisis and the decision of the Maduro government of Venezuela to process Venezuelan gas of the Loran field in Atlantic into LNG. The opposition has long insisted that Loran-Manatee gas can fill the gas supply shortfall in T&T. But there is a deliberate confluence of opposing realities in the discourse for there is T&T’s share of the cross border gas and there is Venezuela’s share and the opposition signed on the dotted line to grant operatorship of the cross-border field to Venezuela. T&T cannot realise its share of the gas save and until Venezuela develops the field and begins production and to do this requires a series of agreements be signed between PDVSA the agent of the Venezuelan state and Chevron as none presently exist. Agreements for the Loran field must then abide by the Organic Hydrocarbon Law and be impacted by the internal politics of the PSUV and the  Great Patriotic Pole. Under the hydrocarbon law Venezuela’s share of the gas of the Loran-Manatee field belongs to Venezuela to utilise to the benefit of all Venezuelans. If it is then legal under the law to send Venezuelan gas to Atlantic in T&T to process into LNG then that LNG belongs to Venezuela and an agreement has to be worked out how Chevron is going to share in the value chain. It is illegal to hand all of the LNG to Chevron for Chevron to dispose of as the agent of PDVSA. That is why the original project conceptualisation called for LNG trains in Sucre state built by PDVSA. Why then has the Maduro government at this time played this card? The answer is called Exxon Mobil and the Essequibo border dispute. Note the full court press of Venezuela in the PetroCaribe member states. What must be noted is that as of today I have seen no announcement of the Maduro government’s decision to pipe Venezuelan gas to T&T in the Venezuelan media. What they will say is that they are researching the possibility of doing so and they have in fact said so. The feasibility is yet to be confirmed. Another play unleashed. October 27, 2015 The private media in T&T continues to play mind games given the gas supply crisis that has been going on since 2010 and only now given the urgency it deserves. On the 22/9/2015 an article titled: “Venezuela y Trinidad y Tobago potencian relacion enegetica” appeared on the Spanish language site of PDVSA. In this article Minister Del Pino is reported as indicating the possibility of gas from Venezuela’s Perla field being piped to Atlantic for processing into LNG. The article did not report Minister Del Pino or anyone of the Venezuelan government as saying that gas from Loran-Manatee will be sent to Atlantic and no such statement has appeared on PDVSA’s website since. Given the  fact that PDVSA is the operator of the Loran field it is expected that said announcement will come from PDVSA when there is a done deal to announce. PDVSA’s silence is instructive. On the 26/10/2015 and article titled: “Venezuela y Trinidad y Tobago iniciaran operacional conjuntas en campos transfronterizos costa afuera” where the classic language of shuffle was used to say very little. What is T&T giving Venezuela in return? What does T&T have that Venezuela wants right now? On the 27/10/2015 the Spanish language website of PDVSA carried an article titled: “Ministro Del Pino; ‘ Para la  incorporacion de barriles se requiere estabilidad de precio’ in which Minister Del Pino who is also in charge of PDVSA was reported as stating that the world price of gas has to be raised in order for the industry to be sustainable. Del Pino was in fact stating the position of Commander Hugo Chavez on exporting  Venezuela’s gas as LNG at such low prices as being a waste of the wasting resource of Venezuela. Del Pino stated that daily production of the Perla field was 400 million cubic feet of gas and that under the unitisation agreement of Loran-Manatee 80% of the gas will be sent to Guiria in Sucre state, Venezuela. That is Venezuela’s share of the gas. Del Pino is then maintaining the Chavista line on LNG and the exploitation of Venezuela’s share of Loran-Manatee gas. Those who delude themselves into believing that the Maduro government is homogeneously monolithic will be played. Also note that the present government of Guyana has played itself into a corner like little Jack Horner.

In 2015 LNG supply and demand are out of balance on world markets. As of 2015 brand new trains have commenced coming on-line both in Australia and the US whilst demand has slacked off in Asia, Europe and Latin America to the extent where analysts are now speaking of a LNG glut on world markets. Asian and European spot prices now follow each other closely whilst brand new production enters the market without the boon in Asian prices to contribute to profit maximisation. At best margins are razor thin as seen in the cost structure of US shale gas LNG with a processing cost of USD 2 per MMBTU and a shipping cost of USD 3 per MMBTU to Asia and Asian spot prices below USD 7/8 per MMBTU. Japanese utility companies who bought LNG following the Fukushima disaster in larger quantities are now showing a preference for coal given the collapse in Asian commodity prices. The EU has not embraced LNG as was forecasted as they continue to utilise coal to generate electricity and have embraced Russian supplied  gas even tighter inspite of the sanctions against Russia. The message is then clear that in times of economic slowdown LNG buyers in Asia and Europe switch to alternate fuel even though they are not green or they forego politics and embrace the energy rich outcast. The relevant reality is the move by Asian buyers of LNG to now create in this glutted market an Asian spot market for LNG. Having adopted the position that the stream of new LNG trains placed in Asia and the long term oversupply of the market suppliers must now end their demand for long term contracts from buyers. Cheniere LNG of the US has responded to this market reality by allowing its contracted buyers especially those in Asia to sell onwards LNG purchased on long term contracts with no return on this to Cheniere thereby boosting the Asian spot market. US LNG is once again changing the order of the LNG business. The glut will disappear only when the level of demand outstrips supply and the LNG stored in tanks and tankers around the world disappear. The estimate for this re-balancing is in the 2020’s. The lesson for T&T again is the fact that the paradigm that informed the creation of LNG trains in T&T is no longer sustainable as it has been falsified. The gas reserves of T&T must now feed manufacturing plants that increase the added value of products manufactured in T&T. Yes we need smelters and plants that turn the outputs into high value products. That is where the well paying jobs will be generated. Hard decisions are now necessary. Haiti beckons!!!